Written and Photos by Matt McGraw

For shoe and history lovers alike, inside the Temple University School of Podiatric Medicine, a hidden gem awaits. The TUSPM Shoe Museum, on the sixth floor of the TUSPM building, has roughly 250 pairs of shoes on display, with another 700 or so more pairs in storage boxes on the floor below—more than 900 pairs total. Unknown to many, this extensive assemblage of diverse footwear has been around since 1976; amalgamated from a number of different shoe collections—including some from the well-known Mütter Museum of the College of Physicians of Philadelphia—as an additional attraction to visitors who came to see the city for the nation’s bicentennial. The museum, originally organized and curated by the late Lisabeth Holloway, is now run by Barbara Williams, medical librarian and archivist, who has been curator since 1992.

Williams, despite having some big shoes to fill, is a great tour guide. She is a veritable fountain of knowledge when it comes to footwear. Throughout the tour she can tell you anything you could want to know about the shoes in the museum’s collection or footwear in general. The shoes themselves are fascinating, but it’s Williams’ descriptions and tales that go along with each pair that really puts you in the proverbial shoes of those that walked in them. She knows the history behind each shoe and knows how they fit into the time periods from whence they came. You learn just as much about history in general from the tour as you do about just shoes.

As for the collection itself, while most of the shoes are from the 19th and 20th centuries, there are some, such as a pair of Egyptian burial sandals, which date back as far as 200 B.C.E. The collection is both diverse and fascinating, with shoes from pretty much every corner of the globe. There are wooden Filipino flip flops with a little bungalow carved into the heel, British Columbian mukluks, French sabots, and traditional Bhutanese tsholham boots to name just a few. Size-wise, they range from as big as a foot-and-a-half-long shoe for a woman with gigantism, to 3-inch-long “Golden Lotus” shoes for Chinese women who had bound feet. There is a wide array of shoes from famous individuals as well, including a number of first ladies, ex-president Ronald Reagan, Sally Struthers, and Kenneth Cole. The sports section has shoes from superstars such as Joe Frazier, Reggie Jackson, Billie Jean King, Arnold Palmer, Bernie Parent, and Temple’s own Dawn Staley. No matter what you’re into, there will be something at the museum to interest you. 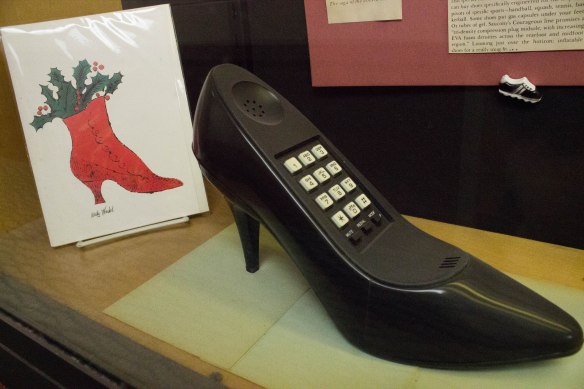 Perhaps one of the best things about the Shoe Museum is that it is totally free to get in! The catch is that you have to schedule your visit in advance, but to see this one of a kind collection it’s definitely worth it, so walk on over to the TUSPM building and check it out.